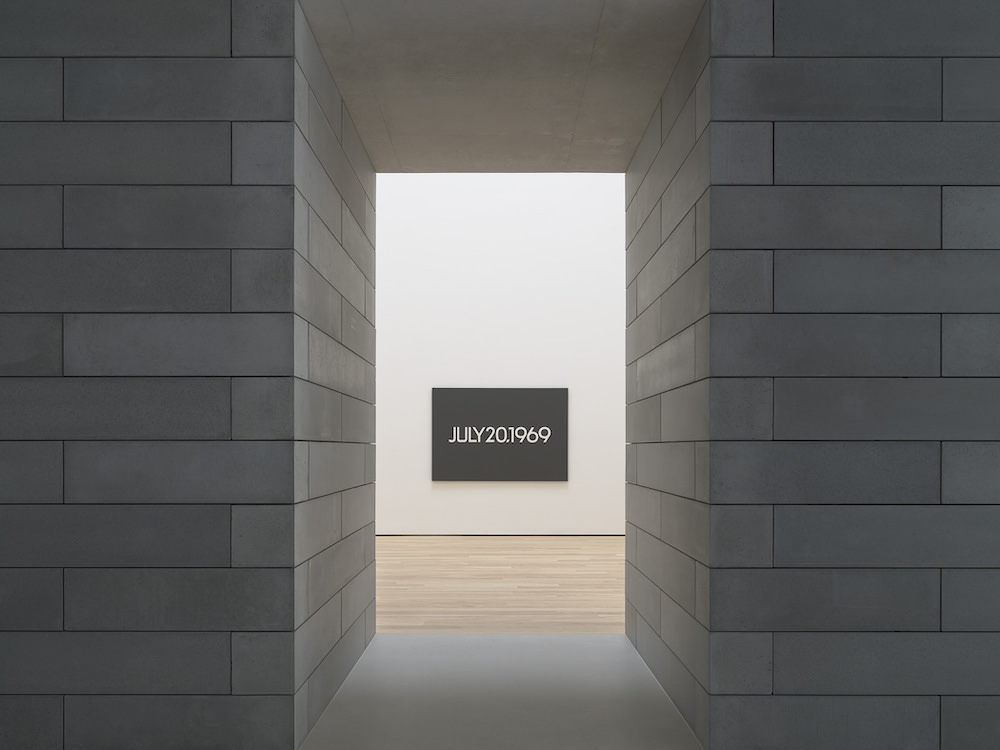 Not long ago, I volunteered to take part in a performance at the contemporary art museum near my home. Very little is known about the artist who created the piece. Even in a recent obituary, his date of death and the names of survivors were deliberately withheld, in keeping with his lifelong penchant for privacy. In death, as in life and art, his biography has remained publicly minimalist.

We do know that he was born on December 24, 1932, in Kariya, Japan. And so he would have been roughly four months from his thirteenth birthday when nuclear bombs were dropped on his country. In his late twenties, he moved to Mexico City with his father, the director of an engineering company, where he continued to study art, eventually moving to Paris, then New York, and wherever else he lived. His art-making turned from early figurative paintings to the conceptual and process-based works he became known for, along with his reclusiveness.

Private lives are always ordinary to someone. It is said that the artist enjoyed seeing friends, drinking, conversing, traveling the world (a lifelong passion). Over the years, he sent postcards and telegrams from distant locales with messages like I GOT UP AT 9:04 A.M. and I AM STILL ALIVE to galleries, artists, and friends, this becoming part of his artistic production, akin to the mail art conceived by others in his generation. He established permanent residences in at least a few of the most cosmopolitan metropolises in the world, either successively or simultaneously, though he never revealed anything about his own experiences of these places, his artistic persona more like a wandering ghost, floating around the globe, creating a sort of code that only he held the keys to, dispersing, or erasing, himself into matter-of-fact one-line messages, the monochrome dates, newsprint, and coordinates of his paintings, lists of names and years, color-coordinated calendars.

In an early black-and-white photograph, the shape of the artists face, the tilt of his head in relation to his inquisitive expression, made me think of a sparrow. Coincidentally, long after I had seen the photograph, a close friend of a friend of his told me that the artist loved to gamble, particularly when playing the game mah-jongg, also known as sparrows, popular among the adults of my own family when I was a child, the endless clack-clacking of tiles into winning combinations during visits and parties, the intermittent shouts of a triumphant Peng!, the cracking of dried melon seeds between teeth. This friend of a friend of the artist told me that her friend often played in these sparrows games with the artist and his wife, and said that he was, no doubt, addicted to it, and would play far into the night. One could even say that he was addicted to gambling in general, as he bet on cards, sports, and horses; he was lured, one imagines, by the intertwined promise of chance and odds with a mythical abandon worthy of Dostoyevsky.

For an artist of such austere and restrained work, whose practice of art was as deeply ritualistic as it was self-effacing, this vice added a pleasantly decadent warmth to his conceptual world. A warmth that extended to the subtle lightness and humor in the work itself, which along with its open-ended serialitya seriality that subsumed each individual artifactimparted a feeling of mournful playfulness, like children throwing dice in a bomb shelter. With purposeful intent, he refused the commonly performed public role of the artist, choosing instead to guard, or cultivate, the mystery of the creator behind the art, as far as such mystery needs a public gaze to exist in the first place, while continuing to make and exhibit art over a lifetime of professional success.

For the newest incarnation of the performance piece, originally completed in the early seventies, a table and two chairs were set up on a low platform in the empty basement room of the museum, a former box-making and printing plant perched on a leveled hill, train tracks running with the river below. The basement was dark, unlit; sunlight filtered in from a line of ground-level windows along the south wall, the warehouse-like hall gradually darkening as one walked away from the windows, past the amply spaced rows of flared cement columns, making the space feel like an industrial Mezquita-Catedral. The digital lights of the sound and recording equipment flickered in a shadowy area beyond the stairs; faces in the milling audience were difficult to discern from even close distances.

Two participantsone male, one femalesat at the table in the center of the room. Their amplified voices droned on through the darkness. A giant black binder lay open before each of them, illuminated by a small desk lamp. Within the binder were pages and pages of typed dates arranged in columns, going back hundreds of thousands of years, progressing from the distant, geological past to the distant, geological present. Each pair of performers read the dates in chronological progression in hour-long shifts.

One of the organizers of the event found me and introduced me to my partner. We exchanged greetings but didnt have time to chat as our part of the performance would soon begin. The organizer didnt give us any specific instructions about how to read the dates but told us to take turns and read slowly and clearly into the microphone, and if we liked, we could mark the dates as we read them with the black ballpoint pen on the table. Like the other males, I would read the odd years; my partner, the evens.

We took our seats at the illuminated table and began to read. Back and forth our voices echoed, creeping slowly along the Middle Pleistocene like a prehistoric slug, alternating years in the sheltering darkness, our voices lost in the hollow concrete chamber, bouncing off the pillars as visitors drifted through the hallowed wilderness, stopping to watch for a moment before moving on, our awareness focused completely on the printed columns of dates, a numerical map that guided us through the breaking dawn of our predecessors. I tried out different variations of pronouncing the years: one hundred ninety-seven thousand and five hundred thirty-nine B.C., one nine seven five three nine B.C., one hundred and ninety-seven thousand five hundred and thirty-nine B.C., and so on, marking a black dot at the end of each line with the pen. Wave after wave of the mundanity of existence washed over us, voided of self-expression, cardinal rhythm a function of time. Without effort or aspiration, we circled a meditative state, the ancient years our spoken mantra, a secular liturgy, time compressing time, expanding time.

The circle broke when my partner read the wrong date.

I paused for a brief moment, waiting for a possible self-correction that didnt come, then read the next date anyway. Time leaked into timelessness. When she read another wrong number, I turned my head toward her, covering the microphone, and whispered, I think you meant , to which she replied with a soft, Oh, fuck , directly into the mic, followed emphatically by the correct date. As my partner continued to stray nervously from the text, sometimes casually reading my date, I decided to ignore her, refocusing my efforts on my own evolutionary progress. I could imagine a Neanderthal leaping out from the dark night and pushing her binder off the table. Did we have a rebel in our midst, resisting her rigid role with a sinister performance of her own? A conceptual performance within the performance that flipped the bird at the famous, enigmatic artist and precious museum, telling them to take all their meaningless dates and shove them up their ruptured time continuum? Were we fools for voluntarily playing this game of rigged consciousness, that the full import of the artists work, of contemporary art in general, could be understood only on the auction block, where admiration swells and swells with the dividing marketplace? Would the dissident go to such subtle lengths to make her point, whatever it was? More pressingly, would someone from the museum quietly escort her off the stage?

An arc can be traced from the original nuclear trauma to the artists first comprehensive retrospectiveSilencethat opened at a prominent New York museum not long after he died. His earliest surviving drawings and paintings are of mutilated bodies in a confined space, body parts in a bland, tiled bathroom setting, and death-mask portraits, or what he called thanatophanies, or apparitions of deathnone of which were shown in the retrospective. Most of his early work he apparently destroyed. The young artist once said at a conference, The menace of matter and all kinds of anxieties are felt clearly in every moment of daily life. He said, Politics and economic anxieties permeate and overwhelm not only the painterly condition, but also the reality in which we live our individual lives. As time passes, his conceptual turn seems more and more aligned with the Upper Paleolithic cave paintings in Altamira than any particular modern trendan art of profundity in anonymity, of repetition and self-imposed rules that, in his case, evokes an external uniformity that concealed a broken interiority, like the special branches of white charcoal he wanted hidden beneath the finished wooden floorboards of the permanent gallery room of his multilingual date paintings.

The hour ended, our time expired. The organizer came over to thank us, avoiding eye contact with my partner, who looked happy and relieved, saying how much fun that was and that she couldnt believe she had gotten through it.

You had a little trouble, didnt you? the organizer said to her, nodding reflectively. She brushed it off, rustling through her shoulder sack. No reply forthcoming, the organizer thanked us again and walked over to the next pair of eager volunteers waiting on the sidelines.

While I was wondering if I should say anything to my partner, she turned to me and exclaimed in a rush: Im so sorry about the mistakes. Im actually severely dyslexic, but I told myself I just had to do this. Thank you so much.

Jeffrey Yang is the author of the poetry collection Hey, Marfa and the editor of a forthcoming expanded edition of Mary Oppens autobiography Meaning a Life.Read his poem Ancestors, which appears in the Winter 2019 issue.