The Shelf of Special Things 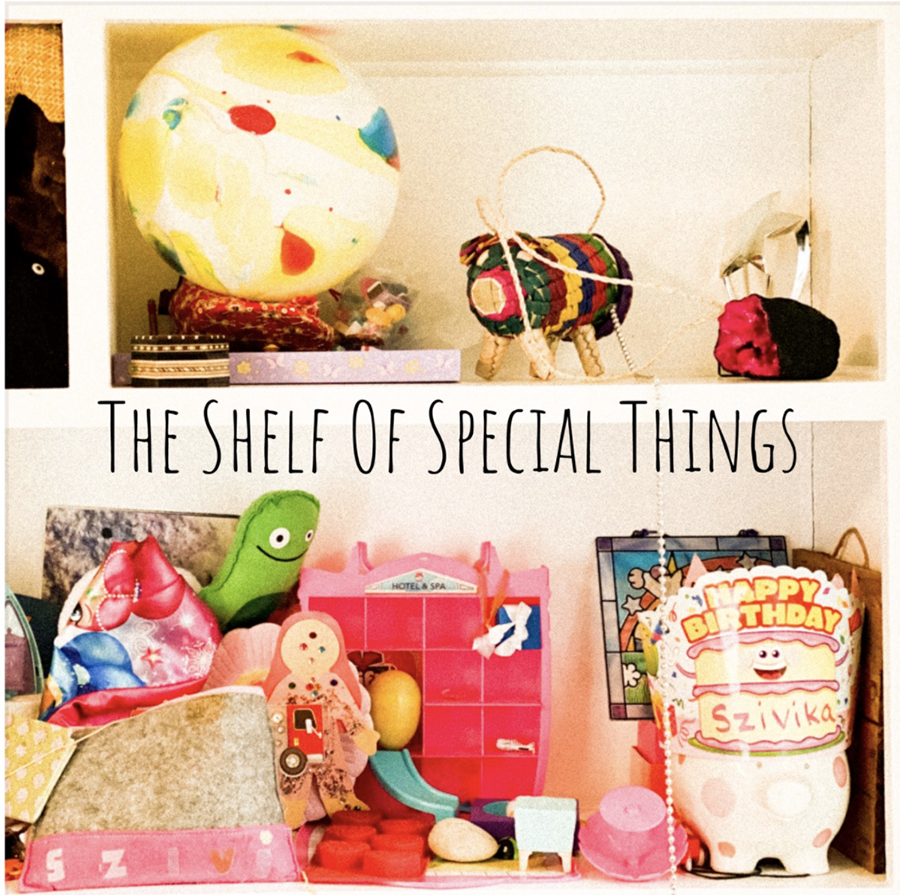 My daughter has a special shelf. Upon it, she keeps all her ‘special things’. I did a covert inventory of her special collection one day while she was at school. This space houses, among other items: a colorful balloon, a pouch of glitter nail polish, various craft projects, a polka-dotted piggy bank, and a class photo of her former preschool class. Some of the more esoteric items she has curated are: a woven purse in the shape of a pig which her cousin brought from Mexico, a geode crystal with a faux pink quartz interior, a small plastic trophy which boasts the ambitious title of Super Awesome Kid, and a dirty stuffed cat which she once dubbed Pinkalicious. On the day she spontaneously named that cat, we were at the crowded funeral of a friend of mine. My daughter’s determined christening of that silly stuffed animal was one of the few moments I smiled that day or even that month.

I’ve often asked my little girl if she thinks it might be a good idea to organize her chaotic shelf of keepsakes or possibly even thin it out some of the junk. Make some room for new special things? I say delicately. Her response is always unequivocal: No, Papa, no, and we move on to less contentious issues like potential cereal selection for breakfast. Somehow though, even the seemingly bland arbitration between Cheerios and Cinnamon Toast Crunch invites some amount of controversy in our home. Either the bowl is the wrong color, the cereal to milk ratio is inadequate, he has more cereal than her, or vice versa.

As I examine the items which my daughter chooses to take up space upon her shelf of special things, I silently question why she even needs a special shelf in the first place. Both my children’s possessions have already taken over the entirety of our home. Why on earth do they require a dedicated space for a special few? Blonde and brunette Barbies, existing in varying levels of nudity, lay splayed and vapid as far as the eye can see. Toy cars underfoot and out of mind litter the parquet floor. Fluffy stuffies congregate and mate inter specialty all around us. A white goat is improbably humping a whale puppet and three octopi crocheted by my mother are proposing to engage in an illicit under the sea menage a trois. Legos and thousands of other plastic elements have stormed our carpets and floors like the American army once did Normandy. Everywhere the kids go they leave some trace of their beings behind. They mark their territories like alpha neighborhood dogs pissing on trees and fire hydrants. I can’t take a step without one of my daughter’s LOL dolls jabbing me in the sole of my foot or clumsily tripping over one of my son’s many transportation devices. It is a bloody miracle that I have not slipped and broken my neck yet.

We parents certainly get in on the territory marking as well. My wife sheds her outfits upon the closest available furniture at the end of the day. The pile grows and grows, day by day, until she needs to wear one of them again or it all falls over. I discover strands of her never cut hair in the most unlikely of places (the dining room table, curled around a wooden stirring spoon in the kitchen, in my son’s diaper) and the most likely places too (in the shower, on her hairbrush).

I, too, shed my worldly possessions around our home like a Whirling Dervish does his dandruff. I may be the worst offender over the age of five in this whole damn place. I own four different ukuleles which I swear grow little legs at night and travel to new and exciting spots as we are all sleeping. They must be writing lighthearted songs that we will never hear with our eyes open. I also deposit scores of forgotten lines of floss upon various bathroom faucets for later use. Gross, I know. Copies of my old New Yorkers which I have not read, but refuse to recycle in hopes of reading eventually, collect in random, clustered piles like mini paper Stone Henges.

It turns out, all of us in this wild band we call a family, possess the unconscious desire to spread out our personal objects over as wide of a space as is humanly possible. We want these objects to be in our line of sight when possible so we can keep them safe. We want our loved ones to see and appreciate these items as much as we do; to cherish their infinite possibilities too. But, as much as we truly yearn for affirmation from the only people who truly matter to us — our family — it is these same individuals that know us and love us enough to show us their true sides and to be honest with us about what they truly feel too.

I’m pretty sure that my wife thinks it is disgusting that I abandon floss around our house like a crazy pirate who swears he will come back one day for his buried gold. It grosses her out even though she knows and appreciates that I am trying to use less plastic one tooth at a time. I also wish I did not have to fish her gigantic, moldy human hair balls out of the drain of our shower on a quarterly basis. Even though I do, I love my wife’s long, flowing locks. I would be lost if she cut them off. My son has no interest in his sister’s prolific doll collection. He is completely indifferent to their dresses and curls, but he is obsessed with his sassy older sibling. My daughter has little to no appreciation for his crew of shiny Hot Wheel cars. They have wheels, not clothing, but she adores her little brother like it is her calling in life.

Now, I get it. I finally understand why the special shelf is so, well, special. I realize, too, that my daughter is a genius. As her trophy promises the world, she is a Super Awesome Kid. In the rarified space of the shelf of special things, no smudgey fingers but those belonging to the proprietor’s may touch or alter the altar. It is a safe space. It is treated like a museum with a board of one in charge of each upcoming exhibition. We all need special shelves to guard that which we covet and it does not have to be a literal shelf. It can be a dark drawer or a corner in the garage. It might be a sacred space in a closet or, most often, the unmolested serenity of a room in our minds. We all have a special shelf upon which we store the things we love even if we don’t realize it.

My young son is still just beginning to understand the whole special shelf concept. The space he is currently developing in imitation of his older sister is still very new and spare. Its modest ornamentations — a disassembled Lego spaceship, a knitted dog, and a few other seemingly random items — have none of the obvious pizazz or intention as his sister’s does. But that’s just my dumb dad opinion. More than likely, I am just completely missing the point of his brilliant and spartan three-year-old artistic intention, his subtle toddler purpose. After all, it is his shelf of special things, not mine.

For more essays on parenting visit www.nursepapathebook.com and sign up for the newsletter. Nurse Papa is a prescriptive and heartwarming book written from the perspective of a pediatric oncology nurse who is also a father. The stories within are directed at parents and all those who are looking to ask and answer some of life’s big questions. You will laugh, you will cry, and you will learn about yourself.

If you believe in the work we are doing here at The Good Men Project and want to join our calls on a regular basis, please join us as a Premium Member, today.

All Premium Members get to view The Good Men Project with NO ADS. Need more info? A complete list of benefits is here.

The post The Shelf of Special Things appeared first on The Good Men Project.